Oh the irony.  While Winter Storm Pax dumped massive snowflakes down from the clouds, human Pax had an endless stream of tears rolling down his face.  Why the indoor precipitation overload?  We’ve been trying to transition sweet baby Pax from napping exclusively in the Ergo carrier to his crib.  That’s right…I’ve spent the last 5 months wearing him for every…single…nap.  To be totally honest, I mostly loved it.  He would sleep for up to 2 hours in there, and it’s a pretty deep sleep, so I could  walk to Salsaritas, tackle the daily Mt Everest laundry pile, walk the dog, even blow dry my hair and he wouldn’t wake up.  Sure, I dropped countless globs of guacamole in his hair and my back occasionally went numb, but it worked for us.  I felt like I got to snuggle him so much more, and felt very in sync with him.  All was well and boy was I mastering this mom thing! 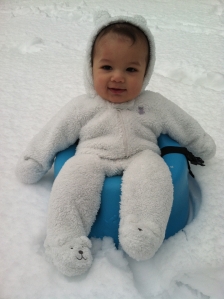 And then the meconium hit the fan.  I had foot surgery to remove an area that could potentially develop into melanoma (thank you, high school me, for using the tanning bed you idiot).  My in-laws came in town to help out and celebrate the holidays as it was a week before Christmas.  After surgery I was supposed to stay off my feet for a few days and rest (HA).  My mother in law asked about his nap routine so that she could put him down while I was out of commission.  I started explaining the Ergo system (put him in the Ergo, stand in a dark closet, bounce up and down, make the shhhhh sound and hum a lullaby while attempting not to breathe) and the look on her face…I knew I was in trouble.  It wasn’t until this point that I had realized that this little system we had going would only work with me, and that what I was doing wasn’t “normal.”  I just assumed everyone did whatever they had to do to get their nuggets to sleep!

It’s so frustrating when you have no idea what you’re doing as a mom.  For the first 3 months everyone’s like “oh yeah just do whatever it takes to survive,” so when you find something that works, you keep doing it.  Baby will only nurse if the room is a cozy 74.5 degrees, you don’t speak or breathe and only wear 100% cotton shirts?  Ok!  Baby will only tolerate the bath if you sing Enya, light Diptyque candles and gently hand wash him with La Mer in a clockwise motion?  No problem!  Then the clock strikes 3 months and 1 day, and people’s attitudes suddenly change from “girl you’ve just got to survive” to “why don’t you have him trained yet.”  I was taking hits for everything…his frequency in nursing, his sleep locations (nap in Ergo, nighttime in Rock n Play beside our bed), his night wakings, his outfit choices (he must be hot!  oh look now he’s cold!), the dimple on his left cheek not being perfect enough (kidding).  Everyone’s intentions were good, but when you’re a completely clueless new mom every comment can feel like a jab.  But seriously, between the pressure from outsiders, strong suggestions from the pediatrician and severe lack of sleep, I started to lose it.  Our happy little system was gone.  Once you know something you’re doing isn’t normal, you start to question yourself every time and lose the little confidence you had built as a new parent.  I was stressed, angry that our system was ruined, embarrassed that I was doing something that others considered strange and frustrated that I felt like a failure in a sea of successful mommies.  I knew something had to be done.

Fast forward a few weeks and we’ve made significant progress on his earlier bedtime AND sleeping in the crib at night!!  But my little guy has been fighting like the Real Housewives of Atlanta to keep those Ergo naps.  I mean he has literally been beating me, clawing at me and screaming like a maniac to fight going down in his crib.  We’ve had a few successful moments here and there.  Half the time I end up caving and either putting him in his little Ergo cocoon or just holding him and snuggling.  During the snowstorm I gave up after letting him cry for a few minutes and snuggled him.  He wrapped his arms around my neck, sniffled a couple of times and then his tiny precious little body just relaxed and he fell asleep on my shoulder.  During a week of complete hell, it was absolute heaven.  We’ll get back to nap training later; sometimes you just have to ignore the haters and snuggle your sweet little babe. 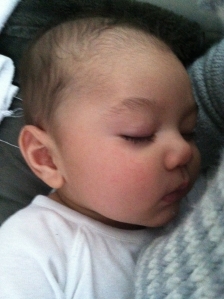 Breaking the sleep law and snuggling with my nugget